Here’s the Australia Cricket Schedule with a list of confirmed ICC and domestic cricket series in year 2021 & 2022. Find dates and venues of upcoming tournaments (both home & away) along with fixtures of each match during the series here. Click on the series to see details of all T20, ODI & Test matches. 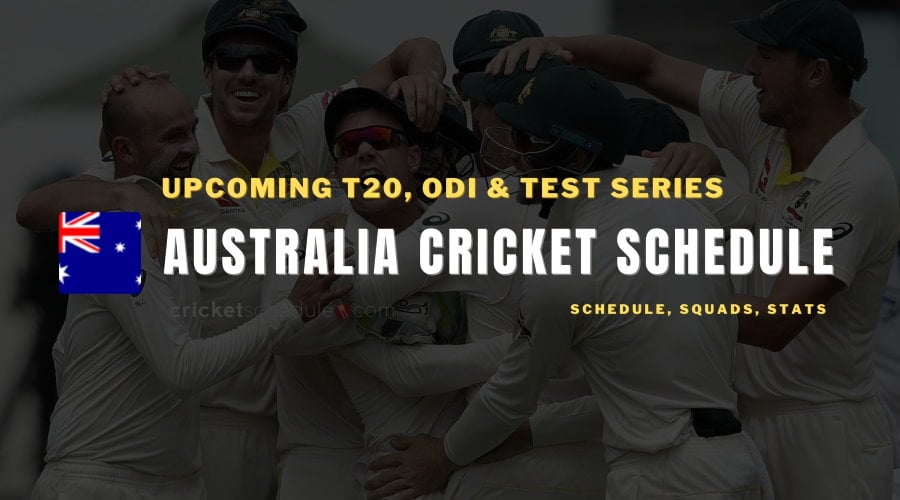 Australia has multiple bilateral and ICC events lined up ahead for the 2021 and 2022 season ahead. While the series against South Africa in February has been postponed till March, the team is on schedule for 5-match T20 series against New Zealand during Feb-Mar period. In October, Australia is scheduled to play a bilateral series against Bangladesh just before the T20 World Cup in India. The team will head to the mega ICC event, T20 World Cup, that is being held in India. The Ashes series between Australia and England will be 5-match Test series that begins in December.

In 2023, Australia will participate in the 13th edition of ICC Cricket World Cup. This event is also being hosted by India during October and November period.

The new FTP is centred around a new Test Championship and a 13-team ODI league that will act as a qualification route for the 2023 World Cup. For Australia, among other things, it means two Test series against India across the next three summers, a Boxing Day Test for New Zealand and a one-off clash against Afghanistan in 2020.

What are the main series in Australia cricket schedule this year?

Is Australia scheduled for tour to any country?

Right now, the Australia is hopeful for England tour later in September / October. It will continue to host other teams after October 2020.

Will Australian players participate in IPL 2021?

Yes, India is hosting the IPL 2021 under bio-secure environment. The players will be playing both IPL and PSL under strict regulations sets by Cricket Australia, BCCI, PCB and ICC during the COVID-19 pandemic.